Tiree Trust are delighted to introduce Tiree’s new ranger, Stephanie Cope. Stephanie took up the pos
ition at the beginning of this week and will be using the coming weeks to get up to speed with the project and familiarise herself with the island. 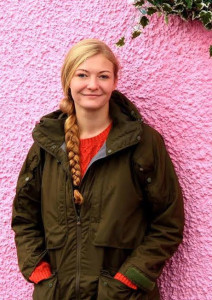 the last 4 year’s working as a ranger on the neighbouring island of Mull and is looking forward to her latest challenge on Tiree!

The management of the Ranger project was transferred to Tiree Trust from Tiree Rural Development at the end of 2016 and match funding has been secured from SNH for a further 3 years. There will be very little change to the way the project is managed, although Steph brings a wealth of experience from her time with the Glengorm Estate on Mull so we look forward to seeing how the project develops. The Ranger will still be mainly located
in the office at the Rural centre, along with being out and about in the community.

We would like to take this opportunity to thank Steve Nagy for all of his hard work and effort he put into the Ranger post and wish him well in his new post with Cal Mac.