Most of you will remember the Island Futures Charrette workshops that took place last year, facilitated by Ironside Farrar Ltd. A variety of public meetings and workshops were carried out and attended by the community who were encouraged to input into the process.
The results from the Charrette were presented to The Trust in the form of a Socio-Economic Baseline Study and a Strategy Report.  In October of 2016, Tiree Trust held a public meeting to present the key information collated from the reports. Unfortunately, this meeting wasn’t well attended and it was felt that we should re arrange the meeting in order to give the community another cha
nce to learn about the key results from the Charrette process and what the ‘next steps’ would be in relation to the recommendations.

The second public meeting will be taking place on Wednesday the 22nd of March at 7:30pm in An Talla and we would urge as many people as possible to come along. 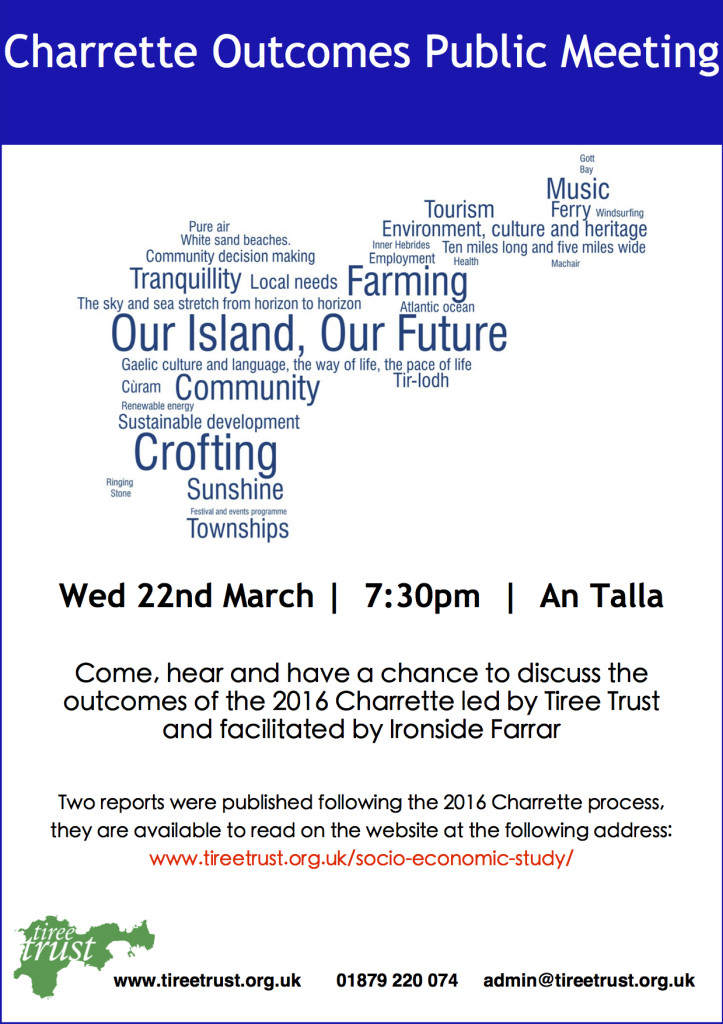 Tiree Trust have recognised the recommendations from the Strategy Report and have started to investigate the idea of ‘Team Tiree’.  A working group called ‘Tirisdich Còmhla’ (Tirisdich Together) has been set up to investigate the advantages or disadvantages of combining Tiree’s biggest community groups, including Tiree Trust, Tiree Community Business and Tiree Rural Development working much more closely or possibly even combining. An additional article which describes ‘Tirisdich Còmhla’ in more detail, can be found under ‘news’.

We hope to see you all at the meeting on the 22nd. If anyone has any questions prior to the meeting then please get in touch with a member of Tiree Trust by calling the office on 220 074.

Both reports are available to download at the following links:
Socio-Economic Baseline Study