Tiree Trust’s annual Careers’ day took place on Wednesday the 8th of June. The event which is aimed at school children, young adults and anyone interested in looking at a new career direction was a success despite a few organisations and individuals having to pull out due to the extremely foggy weather which played havoc with both the ferry and the plane. During the day An Talla was set out as a market stall, where everyone got the opportunity to browse various organisations such as local business venture Wild Diamond, the very successful band Skerryvore, award winning Tiree Music Festival, Sound Production from Ayr College, The Co-op and Tiree Trust who employ a variety of people on the island. Due to the lack of transport to the island on the Wednesday, we were missing Skills Development Scotland, Sabhal Mòr Ostaig, Open University, Business Gateway, Job Centre Plus and Army Careers. The marketplace was open throughout the day, and all of the high school children came along in the afternoon to 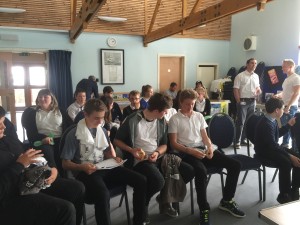 have a wander around the stalls, speak to people and also

listen to two talks, one from Paul Hoolihan, who is a sound production lecturer at Ayr College and has a wealth of experience in this field, we also heard from Tiree native, Daniel Gillespie who is a founding member of Skerryvore and director of Tiree Music Festival and Oban live. Daniel gave an interesting insight into his career and the various projects in which he is involved. We would like to say a big thank you to all of the speakers, individuals, organisations and businesses who attended the Careers day and those who made the journey over for it especially. Special thanks to all of the children who came along from Tiree High School – we hope you enjoyed it and found it useful and insightful.